written by The Devil Wears Salad October 1, 2019
Jump to Recipe

Here’s a salad recipe for anyone who’s looking for a non-leafy salad. This Freekeh and Pomegranate Salad mixed through with a sumac infused yoghurt is simply divine. 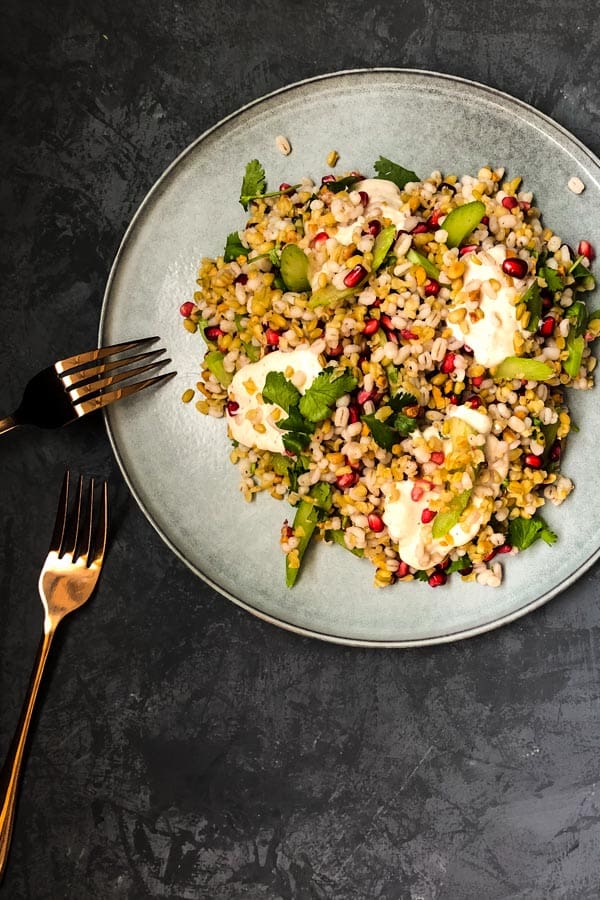 Freekeh is considered to be an ancient grain, originating from the Middle East. The word Freekeh is an Arabic word, which means “to rub”. There is a folk tale that tells the story of how the grain was created under unfortunate circumstances.

About 2000 years ago, a village was under attack and their crop was set on fire. The villagers rubbed off the outer layers which were burnt and cooked up the grain. And this is how freekeh came to be. Love a good story!

Freekeh is harvested from durum or young wheat. It has a smoky and nutty taste and it is a cross between barley and brown rice. Many people in fact substitute their rice component for this ancient grain. Unfortunately, this does mean it’s not free of gluten.

Freekeh has made a popular resurgence in the cooking world partly due to its health benefits. It is high in fibre and low in fat as there is less than 1 gram of fat per serving. It also contains plenty of zinc and is high in iron.

Check out our other freekeh salads: Rainbow Chard Salad with Freekeh and Pistachios and Freekeh Grain Salad with Preserved Lemons.

Why I Love Barley

Barley made an appearance in my childhood on a very regular basis. But not for savoury dishes. My mother used to make barley drink with rock sugar and nashi pears. In fact, she still does, and my daughter loves it!

Barley is also used in a very well-known hot dessert soup with gingko nuts and bean curd skin. I’m sure it doesn’t sound so appealing but it’s a staple and so delicious. In Malaysia, despite the heat, I would still smash a bowl of this dessert. I’d be sweating and complaining but oh so worth it!

My first savoury encounter of barley was a hearty lamb shank and barley soup. I actually didn’t realise there was barley in it but when I discovered the soup was filled with it, I was so happy. So of course, the natural progression after that was to try lamb and barley stew. So good! 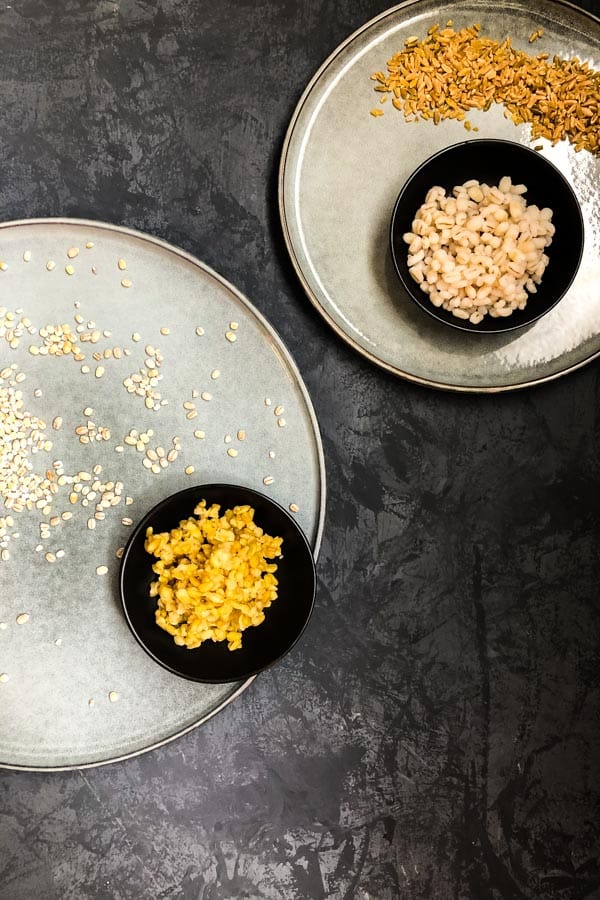 I love this fruit and whenever they are back in season, I always manage to find an excuse to make a salad with pomegranates. In our household, I usually deseed them and store it in the fridge so we always have it readily available. Quite often we eat it on its own, sometimes with yoghurt for breakfast or a quick sprinkle over any side for dinner.

At some point I wanted to find out more about this fruit because it wasn’t a fruit I grew up with in Asia. I was only really introduced to it when I moved to Australia. I found some really fun and cool facts about the humble pomegranate: 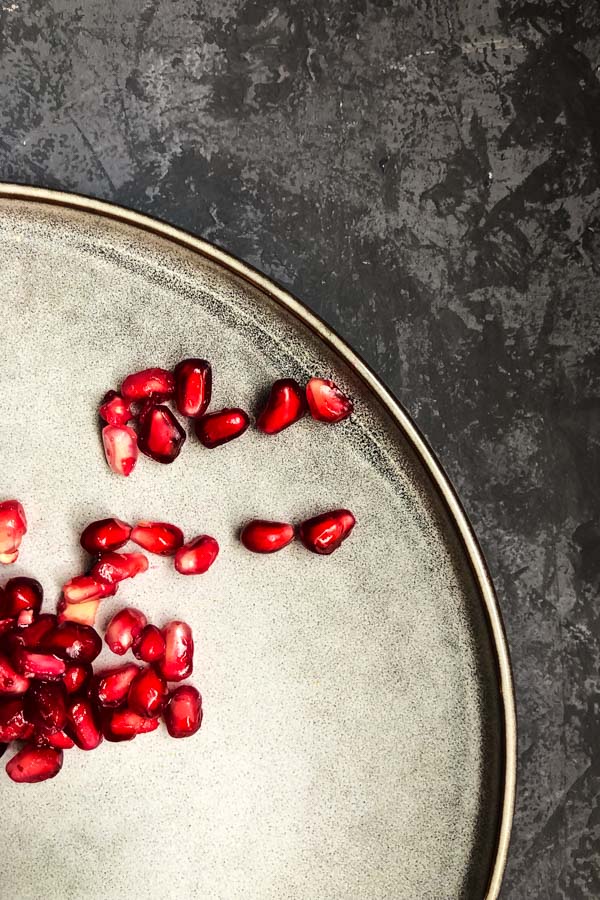 Why I Love Pomegranate, Barley and Freekeh Salad

I am not always in the mood for a leafy salad. Grain salads for me provide more of a supplement rather than a side to complement the main dish as it is quite a heavy salad. I look at it like a rice accompaniment.

Barley and freekeh make for a great match. To add some texture, I decided to add some sweet and tangy pomegranates with the crunch of toasted pine nuts and crushed peanuts to the salad recipe. But what binds it altogether and gives this freekeh salad massive flavour is the yoghurt dressing.

I could eat this salad forever!

How to Make Pomegranate, Barley and Freekeh Salad

How to Cook Barley and Freekeh

So, how do you cook freekeh?

Bring to boil 2 cups of water. Add the freekeh with some salt and boil it on medium heat for 40 minutes. When done, drain the freekeh and run under cold water to stop the cooking process. If you have bought cracked freekeh instead of whole freekeh, it will cook faster so only half the time required.

In another saucepan, bring to boil 2.5 cups of water. Add the pearl barley with some salt and boil on medium heat for 40 minutes. When done, drain the barley and run under cold water to stop the cooking process.

How to Prepare the Rest of the Salad

For the celery stick, get rid of the leafy tops and slice it thinly in a diagonal manner.

Roughly chop the coriander to give you ½ cup.

Toast the pine nuts and crushed peanuts separately on a small fry pan. No oil is required. Just give it a good shake to even up the toasting process. It doesn’t take long so keep an eye on it. Set aside once they are golden brown. 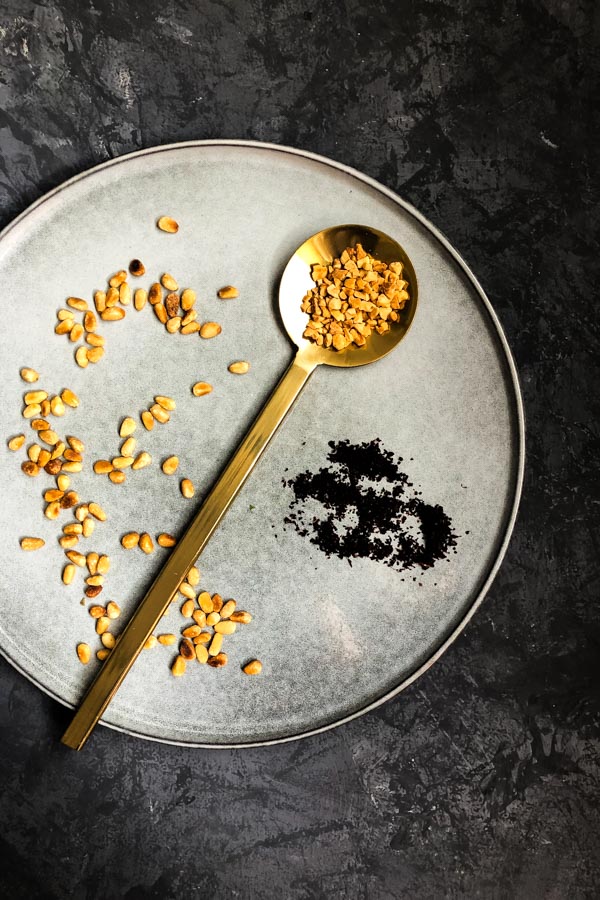 How to Make the Spiced Yoghurt Dressing

I absolutely love the combination of grains and yoghurt. The creamy consistency of the yoghurt folded through the freekeh and barley makes for a match made in heaven!

In a small mixing bowl, add the Greek yoghurt, honey, sumac, and cinnamon. Mix it well into the honey is completely enveloped by the yoghurt.

To add to the Middle Eastern theme, a touch of sumac infuses the yoghurt beautifully. This spice from the deep red berries of the sumac bush makes a regular appearance in my cooking. It gives it a slight tang and works well with the pomegranate.

I’m not a fan of mixing the yoghurt though the salad ingredients. This salad requires a “build” assembly.

Place half the salad ingredients on a platter. Using half the yoghurt dressing, put dollops of yoghurt on the salad. Then add the remaining half of the salad on top and dress with the rest of the dressing.

If you prefer, you can place the yoghurt dressing in a bowl to the side for your guests to help themselves. I would make an extra half or full serve of the dressing though in case you have guests who love it so much they may help themselves to more than the salad needs! Trust me, this happened to me once, so make extra!

This is quite a heavy salad so if you have a heavy main, this serve could stretch out for 6 people if you have small eaters. You definitely won’t need a second side if you’re serving this freekeh and pomegranate salad. Enjoy our grain favourite! Let us know if you love it as much as we do! 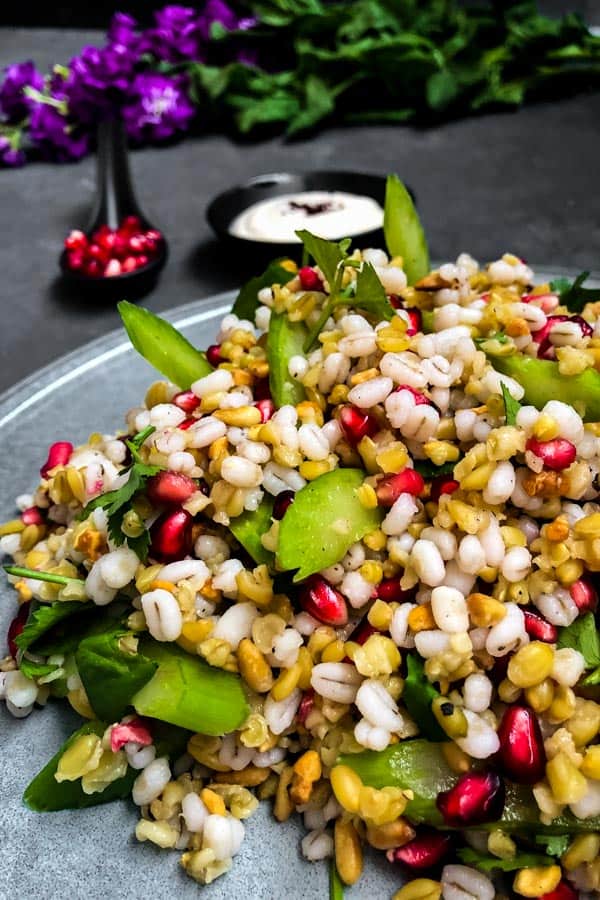 This is just devine and well worth the effort to make. Wonderful contrast of flavours and textures and actually tastes like it is healthy too 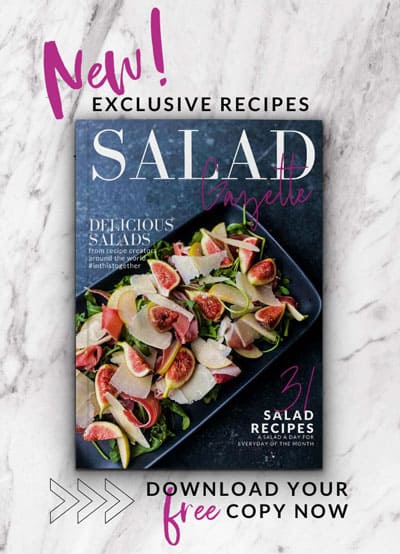