Korean pickled radish (chicken-mu) is an incredibly popular Korean side dish or banchan that is served up in almost all Korean restaurants worldwide. Using only 1 vegetable, learn how to make this at home so you can have it anytime!

Why You’ll Love This Side Dish

Making a good vegetable pickle of any sort is quite a rewarding process. This Korean pickled radish side dish is no different. What could be easier than shoving some vegetables into a jar and adding pickling juice? The results are always so delicious!

Korean white radishes are such a great vegetable to pickle, and it just adds a crunchy side dish which helps to cut through fatty, heavy and mainly meat dishes. It acts as a reset for the palate.

It’s also a great Korean side dish because you can prepare a few days in advance as they last such a long time!

What Is Korean Pickled Radish?

Apart from kimchi, Korean pickled radish is probably the second most consistent Korean side dish to be served. I guess part of the reason is that they are easy to make, budget friendly, and last a long time.

There are many different pickled and non-pickled Korean radish side dishes, but this by far has to be the easiest and cleanest. Korean radishes are cut up into small cubes and added to a brine. It tastes sweet, sour and slightly salty, all at the same time.

Pickled radish can be used in so many different ways such as in our Kingfish Sashimi Salad with Pickled Radish.

Why Is It Called Chicken-Mu?

This Korean pickled radish side dish is also affectionately known as chicken-mu.

“Mu” is the Korean word for Korean radishes, while “chicken” is, well, chicken!

It is a little bit of a nickname of sorts as chicken-mu is always served with Korean fried chicken. This is always done so to help cut through the heavy flavours and texture of deep-fried chicken.

For Korean food lovers, it’s a way to give your palate a break from the oiliness or the fattiness; chicken-mu offers cleansing flavours.

What Is the Best Radish to Use?

Due to its size, the best radish to use is the Korean radish or the Joseon radish, by its proper name. If you can get to a Korean supermarket, you’ll be able to find them.

Unfortunately, not all generic Asian grocers stock them. So instead, you can use the regular white radish. However, they are quite big, so just get one that would equate in size to 2 small Korean radishes.

The standard red radish has also been used on occasion with this recipe. However, red radishes are much more peppery and borderline bitter. The brine will tame this down, but it would still be much stronger than the regular Korean radish. On the bright side, it would look gorgeous!

Flavour/Texture: Crunchy. The pickling process certainly hasn’t reduced the crunchiness of the Korean radishes. In terms of flavour, it has classic pickling flavours of being tart from the acidity and sweet at the same time.

The peppery notes normally associated with radishes is somewhat diminished, although it still has that raw radish flavour.

Ease: So simple! You’re only using 1 vegetable. All you’re doing is immersing cubed Korean radishes into a jar of pickling ingredients. Kind of a set and forget type of recipe.

Time: While the process is beyond easy, we do need a little patience. My recommendation is at least overnight for the pickling to be at its prime. Just leave it in the fridge until the next day.

The upside is you can make this recipe days in advance before you need it. Great way to manage your time!

Ingredients you will need to make Korean Pickled Radish – Chicken-mu.

Korean radish: Korean radishes are short and stout (sounds like the teapot! LOL) compared to their usual white radish counterpart. They also have green tops but are stumpier in shape. You will be able to find these in your Korean supermarket.

If you can’t find these, just use the ordinary white radishes although sometimes I find them so big! So just find one that would be equal in size to 2 Korean radishes.

Alternatively, you can also make an extra batch of Korean pickled radish or use the other half to make Korean spicy radish salad (musaengchae). Our recipe is simply delicious!

Rice wine vinegar: Can’t make a pickle with vinegar. The vinegar increases the radishes’ acidity, kills off any microorganisms, and reduces the chances of spoilage in the short term. This will enable you to keep the pickled radishes for longer.

In most cases, it’s equal part water to equal part vinegar, but not wanting to create radishes that were too acidic, less vinegar is used for this recipe. Feel free to increase the vinegar if you wish.

Korean radish substitute: If you can’t find Korean radish, you can use regular white radish. They tend to be much bigger, so 1 will suffice for this recipe.

Extra tart: If you like your pickling juice to be extra tart, add another ½ cup to measure up with the same amount of water.

Spicy: There are a few ways you can make this recipe spicy. You can add freshly cut jalapeños, mix gochugaru (Korean red pepper flakes) or even Sriracha sauce to the brine. This will definitely give it a bit of a kick!

Step by step instructions for how to make Korean Pickled Radish – Chicken-mu.

Peel the Korean radishes and cut into small cubes.

Place Korean radish cubes into a jar and add water, rice wine vinegar, sugar and salt. Place the lid on and give it a good shake.

Serve without the pickling liquid. If you like your pickled radish to be served at room temperature, take it out before serving and let it warm up.

Great Mains for This Side Dish

How to serve Korean Pickled Radish – Chicken-mu? Easy. It’s a great palate cleanser for any of these traditional Korean dishes.

Temper the heat of this spicy pork bulgogi with the pickled radish. You can also try your hand at making your own Korean fried chicken or my favourite noodles in the world, Japchae.

Korean pickled radish or chicken-mu can last up to 2 weeks in an airtight container in the fridge. This is perfect when you’re meal planning and can at least get one component out of the way early.

Can I use red radish for chicken-mu?

Not all radishes are created equal, with some more peppery and a little bit bitter. The red radishes, by far, would be top of the food chain in terms of how intense the flavours are. You can, of course, use red radishes to make chicken-mu, but it will be stronger in taste.

Is Korean radishes and daikon the same?

Daikon is the Japanese word for white radish. Typical white radish is usually much bigger and longer, whereas Korean radish is shorter and stumpier.

They are, however, quite the same otherwise. You might have even heard people referring to it as Korean daikon or daikon radish (this is silly as you’re basically saying radish radish!).

If you’ve never tried pickling vegetables before, this is the perfect recipe for beginners. Once you’ve made this Korean pickled radish side dish once, you’ll be able to start experimenting with other vegetables and flavouring agents. Time to give chicken-mu a red hot go! 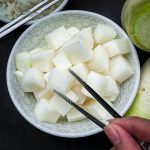