Need some Asian inspired pickles to give some variety? These Korean pickles in soy sauce brine, commonly known in Korea as jangajji, may just be exactly what you’re looking for. Sweet, umami, salty and spicy, it is a pickling recipe worth keeping!

Why You’ll Love This Side Dish

If you love pickles, this Korean version has to be tried! Made with 3 simple vegetables of onion, cucumber and jalapeños, they are truly easy to make. Just cut them up and pour the brine over the vegetables and let it do the work.

The result is so delicious! The soy sauce is a fantastic addition to the brine as it is both salty and so umami! The vegetables soak it up perfectly, so every bite is filled with sweet, salty, umami and tangy flavours.

We love this Korean side dish because it keeps for so long, and it doesn’t even need to go through a canning process. This is a quick pickling process as it is pickled in a jar in the refrigerator. I can make it days in advance and serve it up when I need it.

Jangajji is pickled vegetables. The actual etymology of the word is somewhat convoluted, so think of it as a generic word. You may have also heard it being referred to as jangachi or janghwa.

To ensure they had their supply of vegetables in the cold months, vegetables, be it fresh or dried, were pickled to last them throughout the season. Therefore, they are usually made during the harvest season when vegetables are in abundance to prepare for the months ahead.

Like all food created in the past, they become a staple in our diet as it gets passed on from generation to generation. So while we don’t need to preserve food anymore, we do so because it forms part of what Koreans love to eat.

The one ingredient which makes jangajji so popular is that the brine is made with soy sauce. This ingredient gives the pickled vegetable umami and salty flavours.

When served, you can drizzle some sesame oil and sesame seeds on top.

Which Vegetables to Pickle?

One of the most common mixed jangajji is made with cucumbers, onion and jalapeño. It is crunchy, spicy and strong in flavour. The cucumber tames the onion, while the jalapeño is a fantastic pepper. And yes, it is hot!

There are many single fruit or vegetable pickles you can make with this soy sauce brine. Some examples of single Korean pickles include dried radish, eggplant, ginger, scallions, perilla leaves and many more.

The names of each side dish usually would consist of the vegetable in Korean followed by jangajji. For example:

How Long Do Korean Pickles Last?

Korean pickles will last in a jar in the refrigerator for 2 weeks. Before consuming jangajji, take out however much you need and bring to room temperature before serving.

The fact that it lasts 2 weeks means that you can prepare them way in advance so that you have more time on the day to cook your main fare. This also applies to our Korean Pickled Radish – Chicken-mu (치킨무).

Its longevity also means that if you have leftovers, you can slowly serve them up every night, just like the Koreans do, with the rest of the Korean side dishes you may have.

What To Do with Leftover Brine?

The leftover brine doesn’t have to be tossed out when you’re done with it. A reminder that it needs to be consumed within the 2 weeks.

You can use the leftover brine to make the base of a salad dressing. Just add some olive oil and whisk it all together. Then pour over some fresh salad ingredients for a great mid-week recipe.

You can also use it as a marinade for vegetables and/or meats, or you can even use it as a sauce for stir fries which can be thickened up with a little bit of corn flour.

Flavour/Texture: The onions and jalapeños are crunchy, while the cucumber is slightly softer. Eat them all together for the perfect mouthful when it comes to texture.

Flavour-wise, it is sweet, salty and acidic at the same time. The soy sauce really makes a huge difference to the flavour profile of these Korean pickles.

Ease: No cooking involved in making these Korean pickles. Just cut them up, place them in a jar and pour everything else in to make the brine—a really easy Korean recipe.

Time: Like all pickles, they need time. I always prefer to leave them overnight so that the brine can really do its job. The beauty of it is that you can prepare a few days ahead so that your time is better spent cooking your main dish on the day.

Ingredients you will need to make Korean Pickles in Soy Sauce – Jangajji.

Cucumbers: It doesn’t really matter what cucumbers you use as long as they are fairly thin as it would mean less seeds and, therefore, less water content. If you are an avid pickler, you can most certainly use pickling cucumbers.

Onion: Select a medium-sized onion and cut into cubes. The layers will just open up during the pickling process, and its bite is delicious when pickled in this soy sauce brine.

Jalapeños: Jalapeños have the perfect amount of heat, and it’s a great chilli pepper to select because it is quite consistent in how hot they are. Great for also making other side dishes such as our Air Fryer Jalapeno Poppers.

Water: Base of all brines.

Soy sauce: This is the salty component of the brine while also giving this Korean pickling recipe those umami flavours.

Sugar: Just ½ a cup will suffice for this recipe.

Step by step instructions for how to make Korean Pickles in Soy Sauce – Jangajji.

Slice the cucumbers with the skin on.

Peel the onion and cut into small pieces.

Remove the stem of the jalapeno and roughly cut into smaller pieces.

In a small saucepan, add the water, soy sauce and sugar. Bring to a boil until the sugar is fully dissolved. Turn the cooktop off and then add the vinegar.

Place all the vegetables into a jar and add the brine.

Put the lid on and place in the fridge overnight.

Vegetable variation: These Korean pickles recipe is quite fluid, so you can add any vegetables you like, such as garlic, beans, garlic scapes, radish, chayote and even celery.

Jalapeño substitute: If you can’t find jalapeños, any chilli pepper will work for this recipe. If you like the spice but not enough to blow your head off, you can remove the seeds before adding them to the jar.

Gluten free recipe: For a gluten free version, you can use tamari. It will still give you those sought-after umami flavours.

Great Mains for This Side Dish

How to serve Korean Pickles in Soy Sauce – Jangajji.

Bibimbap: Bibimbap means “mixed rice with meat and assorted vegetables”. Served on rice, it is one of the best ways to use up leftover Korean banchan and meat after a big night of Korean BBQ.

Kimchi-jjigae: Nothing quite like a steaming hot bowl of Korean kimchi stew. Made with slices of pork, kimchi and hot pepper paste, it’s hearty, spicy and morerish. You can have it on its own or over rice served alongside some Korean side dishes to help cool down.

Korean fried chicken: This Korean fried chicken is chicken thighs in a crispy coating that are tossed in a sweet, spicy and savoury sauce. Finger licking good, serve it up with some Korean side dishes to balance out the flavours.

No, jangajji or Korean pickles in a soy sauce brine are not fermented and therefore only have a shelf life in the fridge of no more than 2 weeks. To produce a sour flavour, the vegetables are put into an acidic brine, while the fermentation process is about the vegetable itself giving off a sour flavour without the aid of anything acidic.

One of the world’s most popular fermented vegetable side dishes we consume is also Korean. This would be kimchi. Kimchi is made by lacto-fermentation of napa cabbage, which is fermented by Lactobacillus bacteria.

As mentioned above, no acidic component is introduced to this process. Kimchi can last over 3 months in the fridge as it continues to ferment over this time.

Why do Koreans eat pickles with their pizza?

If you ever order pizza in Korea, they will come with pickles on the side. While this may be a strange concept to the Western world, it’s common practise in Korea.

Pickles and fermented vegetables like kimchi are a staple and must have Korean side dishes whenever they eat a meal. They have grown up with that sour and acidic taste. Korean pickles also help balance a meal, especially heavy dishes like Korean fried chicken and Korean BBQ.

Western meals like pizza and pasta are too rich and heavy for the Korean palate to consume without “taking a break”. The Korean pickles, therefore, gives the palate some respite from rich butter, creams and cheeses.

Which onions should I use for Korean pickles?

The yellow onion is perhaps considered the all-purpose onion no matter what you wish to do with it. This would definitely be considered a safe bet.

White onions can also be used, and although it has a strong taste when you first bite into it, it is the one variety where that taste disappears faster than the others.

If you like onions but not too overly pungent, especially when eating it raw, sweet onions may be the best choice for Korean pickles. These would include Walla Walla, Vidalias and Mauis. These onions are also perfect for salads.

And there you have it! I love the fact that you can use easy to find vegetables to create a punchy Korean side dish that you can pretty much eat with anything! Or, like in our household, they get eaten on their own, and the jar is empty before I know it!

Here are more Korean side dishes you can make at in the comfort of your own kitchen: 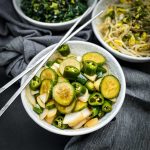