written by The Devil Wears Salad November 7, 2019
Jump to Recipe

Inspired by The Classic Bangers and Mash and Transforming That Idea into A Roast Potato Sausage Salad That’s Bold in Flavour and Big in Heartiness. 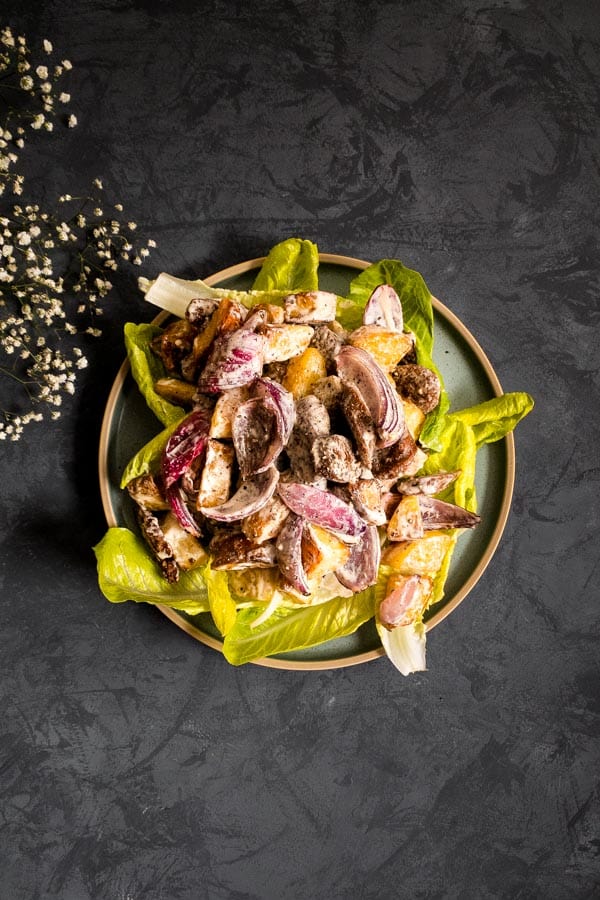 How to Boil Potatoes Perfectly?

I don’t remember exactly when I learnt to boil potatoes the correct way. Perhaps I read it in a recipe somewhere but I do remember thinking it was such a revelation! Yup, one of those a-ha type moments.

To boil potatoes perfectly, place the potatoes in a pot and then fill it with cool water until the potatoes are completely submerged. On high heat, bring a pot of potatoes and water to boil together. When it reaches boiling point, reduce the heat and let it simmer. For smaller pieces you’re looking at about 15 minutes and anywhere between 20 to 25 minutes for larger chunks.

If you’ve been boiling a pot of water and only throwing in the potatoes when the water is boiling, you’re not the only one. I did that for years.

And the reason you shouldn’t be doing that is because when you add the potatoes into a pot of boiling water, the outside gets cooked faster than the inside. Particularly when you’re boiling whole potatoes or larger pieces. The exterior of the potato starts to become powdery whilst the inside is still rock hard.

As I’m not mashing the potatoes, I need evenly cooked potatoes before I roast them. By bringing the potatoes and the water to boil at the same time, the humble potato will cook evenly in and out.

How to Make Crunchy Roast Potatoes Without Deep Frying?

The key to getting the perfect roast potato where the outside is crunchy and the inside is fluffy, is the fat content. It’s the fat that we drizzle on the potatoes which then seep into all the nooks and crannies that crisps up the potato.

For this recipe, I used butter. I simply melted butter and coated the potatoes and put them in the oven. I didn’t do anything overly fancy with them. As I was going to toss the potatoes in a creamy dressing, I didn’t need it to be super crispy.

If you’re really after a potato like no other, you can choose Heston Blumenthal’s choice of fat for his potatoes; beef dripping. He also has a great tip which is to cut the potato into proper cubes with straight sides and edges. Round potatoes are the worst for trying to get that crisp as there are no edges to roast!

Of course, the normal way people would roast potatoes is to simply use olive oil. Certainly, a much healthier way to make them crunchy. 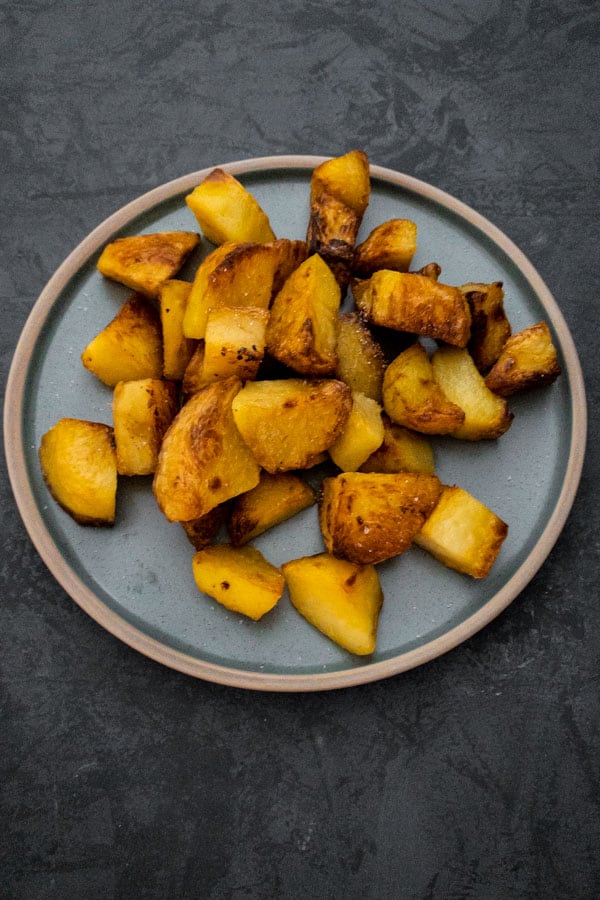 We had a BBQ on the weekend and we had some leftover beef sausages so I thought I’d come up with a beef sausage salad so they wouldn’t go to waste. I thought long and hard about what would make a great combination and settled on easy roast potatoes and a horseradish aioli of some kind.

As with every recipe I create, I spend a fair bit of time staring into the fridge and pantry imagining the flavours and textures. Would they work well together, how do I make an ingredient stand out even if they are leftovers? And by leftovers, I mean the sausages were already cooked on the BBQ! Great salad to make if you’re on a bit of a budget.

This beef sausage salad turned out to be a ripper! It was salty, crunchy and creamy. The family smashed it!

How to Crunchy Roast Potatoes

Who doesn’t love crunchy, crispy roast potatoes? It’s incredible how the humble potato can be transformed into so many different dishes!

To create the perfect roast potato (be sure to read the excerpt above), we will be starting with peeling the potatoes and cutting them into approximately 3 cm cubes. This usually translates to cutting a medium sized potato into 6 and a larger potato into 8. Doesn’t have to be perfect but we’re trying to get them as even as possible so they all cook evenly.

Place the potatoes in a medium saucepan. Fill with cool water, place on the stove top and bring to boil. Once it’s boiling, reduce the heat to simmer for a further 8 minutes.

Drain and then set it aside to dry. Be gentle with them so they don’t break. At 8 minutes, the potato is not super soft so I was able to just drain it into a colander. If yours is too soft, use a slotted spoon to remove from the water.

Melt the butter in the microwave for about 45 seconds to 1 minute. Pour the melted butter over the cooked potatoes. Add salt and pepper and make sure they are all well coated. Place potatoes on a baking tray and spread them out evenly. Put in the oven for 30 minutes at 220°C or 430°F.

At the halfway mark, take the tray out and give it a bit of a toss and shake so the potatoes will brown evenly. Remove the baking tray when it’s done and place the roasted potatoes onto some paper towels in a mixing bowl to remove any excess butter. 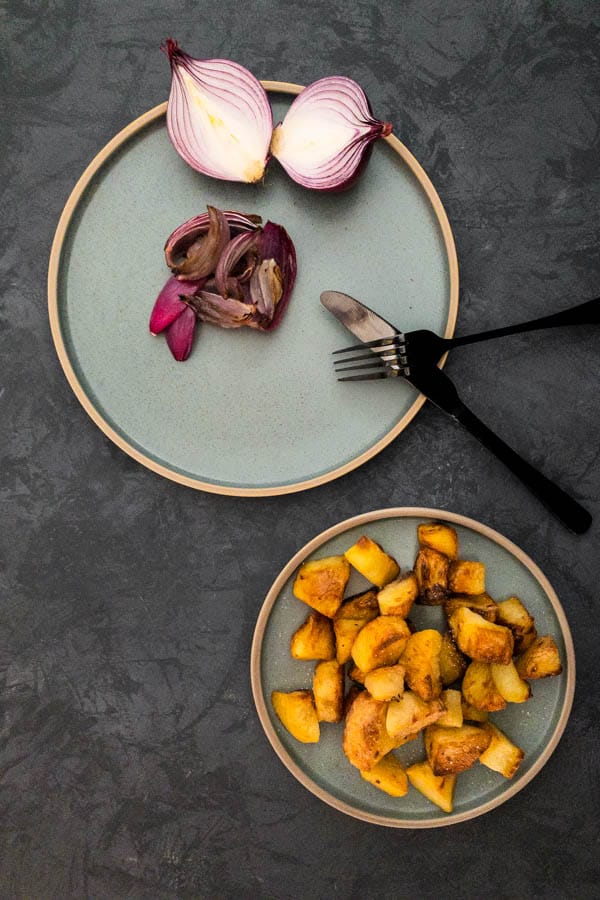 How to Make the Rest of The Ingredients

At the 15-minute mark for the roast potatoes, you’re taking them out for a bit of a toss. At this point, place the baking tray with red onions in. With 5 minutes to go, remove the tray of onions and give that a quick toss and shake as well to ensure its evenly roasted.

At the 30-minute mark, both the potatoes and red onions should be done.

As mentioned above, I used leftover cooked sausages from a BBQ on the weekend. In this instance, you would cook the sausages in pan, grill or BBQ. On the cooktop, fry them on low heat for about 15-20 minutes. Be sure to turn them occasionally so it cooks in its own fat.

When they are almost done, remove them from the pan and slice them diagonally. Return the beef sausages back into the pan and sear all sides until it’s crispy on the outside. Remove and place the sausages onto some paper towels on a plate to remove any excess oil.

With the cos lettuce hearts, remove one leaf at a time and set aside.

How to Make Horseradish Mayonnaise Dressing

This dressing is a horseradish aioli of sorts. In a bowl, add the mayonnaise, horseradish cream, soy sauce and the juice of ½ a lemon. Whisk until all the ingredients are mixed thoroughly and takes on a light and creamy consistency.

In a large mixing bowl, add the roast potatoes, roasted red onions and sausages. Then add the creamy dressing. Very gently fold the dressing through the salad. The roasted onions are very soft so you don’t want to break them or squash them.

On a flat serving platter, place the cos lettuce heart leaves. Arrange it so it covers the whole platter. The lettuce plays an important role as it’s the only non-cooked fresh ingredient and gives the salad that additional crunch.

Heap the dressed salad on top. Season with pepper and serve. I didn’t season with salt as the sausages and potatoes were salty enough.

This salad is big in flavour but good for the pocket! It’s a budget salad that is filling, hearty and bursting with salty goodness. It’s a great salad if you’re entertaining outdoors and you have that BBQ going or having a big picnic. Just heap it on and watch your guests nod with approval as they bite into that potato salad! 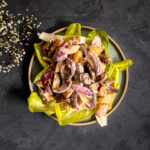 I love a good potato salad, and the fact that the potatoes are roasted makes it even better! Love the addition of the sausage to this salad!

Thanks Lesli! Pretty hard to go past a roast potato hey? We loved sharing this recipe because we used up our leftovers. Good for the hip pocket and great way to reduce food wastage.

This is such a beautiful and hearty salad that it can be a meal on its own. A nice salad for dinner in the summer season!

It sure is great for the summer! The perfect way to use leftovers from a BBQ.