Sweet aromatic oven roasted feijoa paired with crispy streaky bacon is a match made in food heaven. Together with rocket, pears and whipped ricotta, this salad will satisfy the taste buds for sure.

We love trying new produce and ingredients. Gets the creative juices running for recipes.

So when given a box of feijoas from All Aussie Farmers, I was excited to test a feijoa recipe.

I thought of a few different options on how to use feijoa in salads, including fresh slices, poaching whole, making a chutney, even a frozen feijoa granita! (Which, by the way, is so refreshing!)

After tasting it, I settled with roasting feijoa in the oven. The reason? I love how roasted feijoas retain the fragrant sweetness but with extra caramelised bits.

The aromatic flavours of feijoa go well with salty bacon. I love the crispiness of streaky bacon against the soft roasted feijoa and layered together with fresh rocket leaves and pear slices. The combination is something you definitely need to try.

To finish, I piped whipped ricotta throughout the salad, so the cheese does not overwhelm but adds a creamy touch.

What looks like a small lime, the feijoa is a fruit that our friends across the ocean, New Zealand, have embraced whole-heartedly. Feijoa is native to South America, but you can also find them in Spain, Italy, Iran and Russia.

This small egg-shaped fruit has a green exterior with white flesh inside. When you cut it open, it looks a little like a cucumber with the seeds congregated in the middle.

Feijoa is not only a deliciously sweet fruit but packed with fibre and vitamin C. There are many health benefits, including folic acid and other vitamins and minerals such as potassium and magnesium.

I have never tasted feijoa before, and the flavour profile of feijoas are definitely unique.

The initial hit for me was the aromatic fragrance, possibly similar to guava. Then the sweet flavours come through at the end. The flesh is soft and a similar texture to a ripe kiwi and custard apple.

The best way to taste feijoa’s true flavours is to cut in half and scoop the flesh out with a teaspoon.

Feijoa is a versatile fruit that can be eaten raw, baked, stewed, poached, roasted, frozen or preserved. Some say you can use it similar to banana or apple.

The classic pairings with feijoa are pork and ginger, but they also go well with creamy cheese, apples, hazelnuts, pears, duck, chicken, fish, and citrus fruits. Plus, a great match with dark chocolate!

For this feijoa recipe, I went along with the classic pairing of pork plus adding in creamy cheese and pear.

Flavour/Texture: Feijoa and pork go well. Not sure if it is the natural sweetness that pairs with savoury notes of streaky bacon, but the match is perfect. Roasting feijoa tames the aromatic fragrance a little but adds caramelisation and enhances the streaky bacon flavour.

I love how the creamy ricotta cheese softens the overall flavours and texture. Together with fresh rocket leaves and crispy pear slices, the roasted feijoa salad balances well.

Ease: A little more effort is required around the oven with roasting feijoa and making crispy bacon strips. Plus, I decided to whip the ricotta to give it a more airy texture and less rich. Not difficult cooking techniques, just a little more work.

Time: This recipe will take a little more time with roasting feijoa and streaky bacon. You can prepare other elements whilst these are in the oven. Together with whipping ricotta, allow 45 minutes or so to prepare and cook.

Feijoa: Ripe feijoa will be soft to touch but not squishy. Give them a gentle push (like avocado), and you can feel a slight give.

They will ripen off the tree so you can leave unripe feijoa in a fruit bowl, and they will continue to ripen until ready to eat. Choose fruit that is green and with little blemishes.

Honey: I was lucky enough to have some New Zealand Beechwood Forest honey in the pantry, but your favourite honey will work for this recipe.

Bacon: This recipe calls for streaky bacon as the fat helps it is crisp up in the oven. The version I used was wet cured streaky bacon. However, you can use any kind of streaky bacon.

If you have any extra bacon you can add it to our Salad with Roasted Potatoes and Arugula or stuff it into our Whole Baked Apple Arugula Salad.

Rocket leaves: Add a peppery and freshness to the salad.

Pear: Another great pairing with feijoa, pears adds a sweet crispness to the salad. I used William Bartlett pairs in the recipe (and in our Apple, Pear, Almond and Watercress Salad), but again you can choose another available variety.

Ricotta: Made from leftover whey, ricotta is a light and soft cheese used in sweet and savoury recipes. For this recipe, I whipped the ricotta to create a lighter and airy texture.

Feijoa substitution: As feijoa has a short season, you can still re-create this recipe with figs. The pairings of figs with salty streaky bacon, sweet pear and creamy ricotta works well. Roasting figs are delicious.

Vegetarian option: Omit the bacon and replace with toasted nuts or seeds to add the crunch. If you want a savoury bite, check out how to make tamari seeds in Gem lettuce salad
https://thedevilwearssalad.com/tamari-seeds-salad/

Dairy free option: try avocado puree or a cashew nut cream to replace the ricotta in the recipe. Adds a creamy texture without the dairy!

Step by step instructions for how to make Roasted Feijoa Salad with Streaky Bacon:

How to Make the Salad

Trim the top of the feijoa and cut them into quarters lengthwise.

Place cut feijoa in a baking dish and drizzle honey on top.

Bake in oven for approximately 20 minutes. You want the feijoa to be soft and tender but not so soft that it is falling apart.

Remove from oven and set aside.

Grill in oven for 10 minutes until crispy brown. My slices of streaky were a bit thicker than others, so do check in case it burns.

Remove from oven to cool down.

When cool enough to handle, cut each bacon strip into 3-4 pieces.

Cut pear in half and thinly slice.

How to Make Whipped Ricotta

Then add another tablespoon of olive oil.

Continue to blend until ricotta is smooth and creamy. This will take about 2 minutes. The final product will look a bit like whipped cream.

On a large plate, start with a layer of rocket leaves. Then top with roasted feijoa and roasted streaky bacon.

Scatter sliced pear in between roasted feijoa and streaky bacon.

Add dollops of whipped ricotta throughout the roasted feijoa salad.

I used a piping bag to add the whipped ricotta. However, you can also scoop onto the plate.

Great Mains for This Salad

Any great salad needs a god partner to finish of the meal. Here are some great ideas for mains:

Smoked chicken leg quarters are easy to make and extra tasty! For red meat lovers you can try Beef mini roast which is Portugese inspired as it has a piri piri glaze.

If you’re in the mood for some fish, this baked salmon is wrapped in foil and infused with a lemon garlic butter sauce.

How to use feijoa?

* Stew feijoa and make a crumble
* Blitz and make drinks like feijoa smoothies or cocktails
* Bake in cakes and muffins
* Dehydrate and create dried feijoa snacks
* Roast feijoa and add to salads or as a side to roast pork
* For breakfast or dessert options, try poached feijoa
* Feijoa is also popular as a jam or chutney

Do you have to peel feijoa?

It depends on how you are going to use it. For eating as is, yes, I would peel feijoa. The skin is not poisonous or anything, but it has a bitter taste.

However, if you are cooking it down in jams, chutneys or roasting it, you don’t need to peel feijoa.

Can you freeze feijoa?

Yes, you can freeze feijoa. Great way to store feijoa when you have too many. Plus, you can then have access to it all year round for baking.

What is streaky bacon?

As the name suggests, streaky bacon has streaks of fat through it. Streaky bacon is cut from the pork belly, one of the parts with the highest fat content.

What is the difference between wet cured and dry cured bacon?

I used wet cured bacon for this recipe which means it was prepared using a salty wet brine to cure the meat. Dry cured bacon involves rubbing salt to the pork belly and cures in a dry room.

Can I prepare this salad ahead of time?

You can prepare elements ahead of time, but best assemble and pipe whipped ricotta when ready to serve.

Trying new ingredients in salads can be risky, but this is one that paid off. Roasted feijoa is one to try with crispy streaky bacon. This will be a great salad to go with a larger array of dishes and can also share as a starter with a few friends. 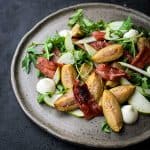 « 19 Salads for Australia Christmas in July
What Goes Well with Capsicum? »