written by The Devil Wears Salad August 12, 2019
Jump to Recipe

Who would have thought an old-world grain and some grass could taste so magnificent? We show you how to introduce a Vegan Wild Rice Salad to your dinner party table. 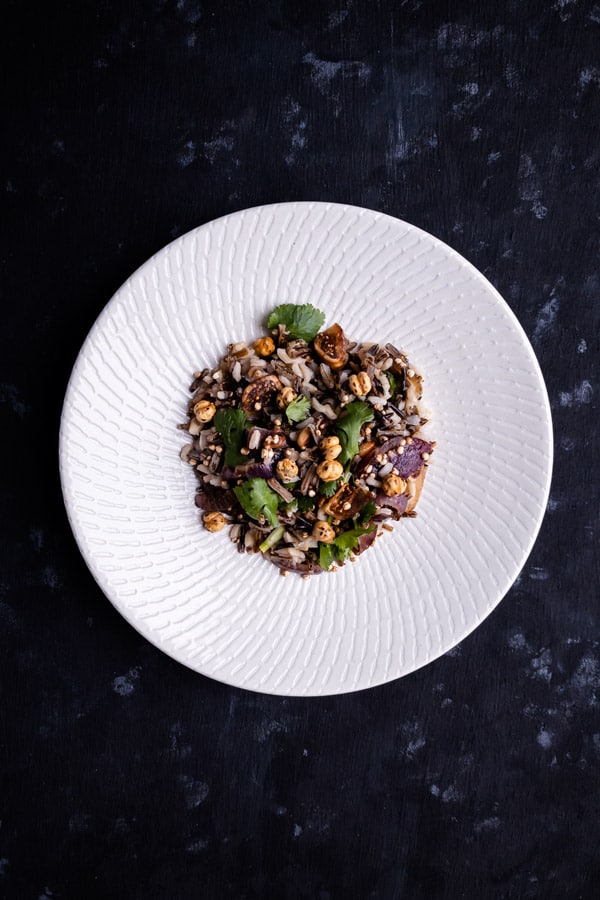 What Is Puffed Quinoa?

KEEN-Wah! I ate quinoa before I knew how to pronounce it. It has somewhat of a cult status don’t you think? One day I hadn’t heard of it and the next it was everywhere! It became the superfood everyone wanted to get their hands on.

There are so many easy quinoa salad recipes out there but I reckon this is one of the best quinoa recipes in our repertoire using puffed quinoa.

Quinoa is an old-world grain, well technically it’s a seed, that can be traced back to the Inca Empire of South America. Quinoa has so many benefits. It’s nutritious, high in antioxidants, protein, and fibre, Gluten Free (yay!), and is low GI.

Considering all these wonderful benefits, why has is only become trendy of late when the South Americans have been eating it for thousands of years?

But to make it even trendier, which makes me love it even more, is that you can pop them!

It doesn’t pop like corn does but the principal is the same. You can pop them in a skillet, pot, or oven. I for one, just get them already popped.

Where to Buy Puffed Quinoa?

I buy my puffed quinoa from my local organics food store. 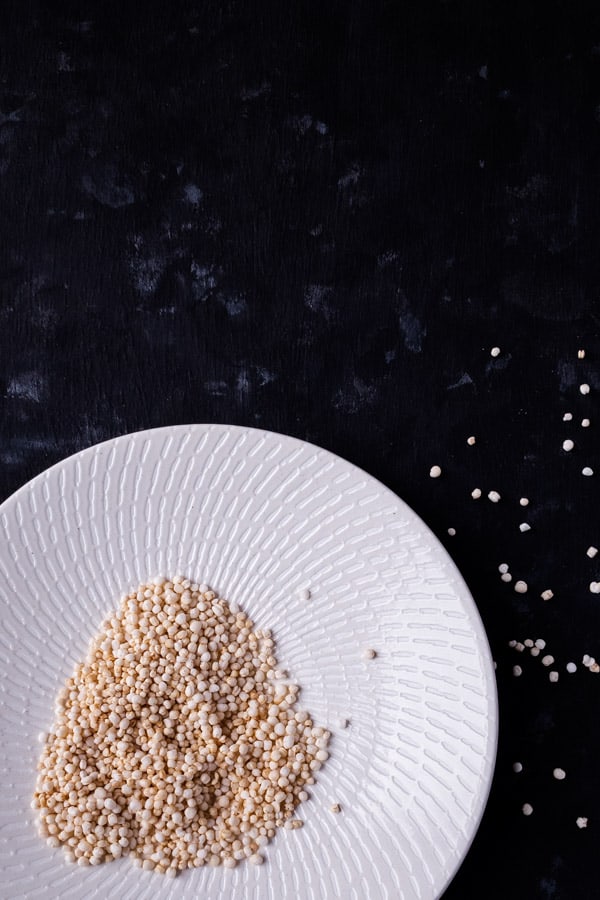 What Is Wild Rice?

When I learnt that, I had 2 immediate thoughts. Never thought grass would taste so good and why call it ‘rice’ when its ‘grass’! I’m Asian so when you call it rice, I eat it!

Luckily, its glorious nutty flavour and rice like texture won me over and it’s now an ingredient I love putting in my salads.

There are many health benefits of wild rice too. These include improving your digestive system, is low in calories, boosts immunity and is free of gluten. Some have said that it helps with weight loss and has anti-ageing properties. I’m always sceptical of spruiking those benefits because seriously…. If it really did I’d be eating it by the bucket loads! But hey, if it does, bonus! 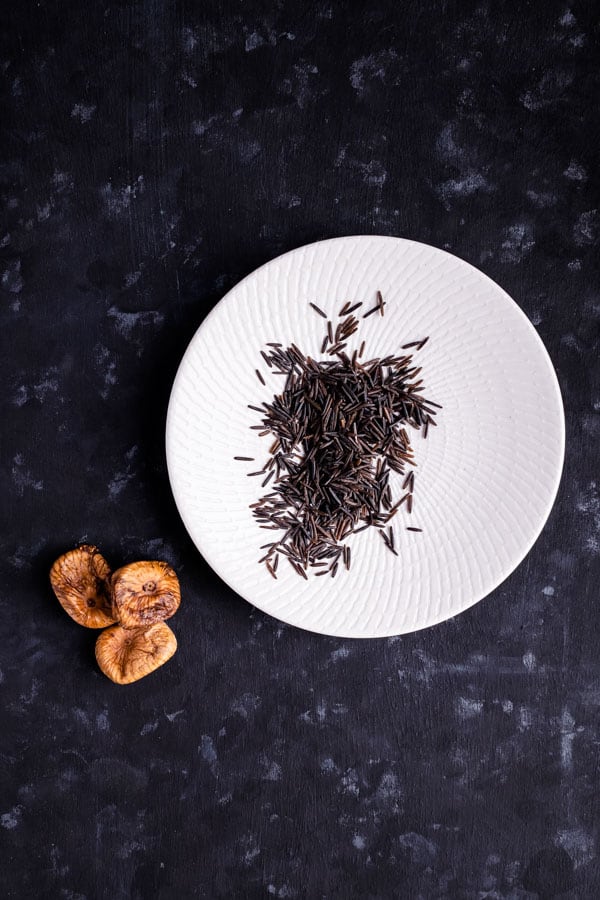 How to Eat Dried Figs?

You can eat dried figs as it is. I eat them either straight out of the packet or in this instance, slice them up for the salad. I like that chewy texture.

If you prefer a softer, plumper consistency, you can soak them in water for about 10-15 minutes. Remove them from the water and pat them dry. You’ll find it will be easier to slice them as they have softened.

I love this salad because it combines so many exotic ingredients that I never grew up with. It gives me a chance to play with ingredients we don’t have in our everyday pantry.

The puffed quinoa doesn’t have an overly distinctive taste, even when toasted, but it’s the texture it provides the salad that I’m after.

It is a visually good-looking salad. Whenever I make it I always get an immediate “oh wow!”.

It is also a great accompaniment to saucy main dishes, so you can soak it up in the rice. The figs provide the sweet component, the pine nuts are laced throughout the nutty flavoured wild rice to give it that slight bitter, toasted flavour in every mouthful.

Cook the Wild and Brown Rice

Boil the wild rice in a small saucepan for 30 minutes. The water to wild rice ratio is 1 cup of wild rice to 3 cups of water.

Boil the brown rice in another small saucepan or rice cooker for 30 minutes as well. The ratio is 1 cup of medium grain brown rice to 1.5 cups of water. I then leave it in the saucepan for a further 10 minutes to steam it and ensure it becomes light and fluffy. If you love brown rice you may also like our Pickled Shiitake Mushrooms, Lotus Root and Brown Rice Salad .

In a small fry pan, without any oil, dry toast the puffed quinoa on low heat for 30 seconds. I tend to just pick up the fry pan and shake it for an even distribution. They toast quickly so watch it!

After the puffed quinoa is nice and toasty, do the same for the pine nuts. It takes a little longer but toast it until it turns golden brown. Will only take a minute or 2.

Slice the Dried Figs and Onion

You want the dried figs to be sliced into small slivers as you don’t want too much of that sweetness throughout the salad. It’s an enhancer, not the main ingredient. I suggest cutting the dried fig into half and then cutting them into thin slices.

For the onion, slice them thinly so it’s easier to caramelise in the fry pan. You want them cooked well as it adds to the sweetness of the salad and provides an element that’s not dry.

How to Make the Allspice Balsamic Vinaigrette

This is a simple process. In a small mixing bowl, add the olive oil, balsamic vinegar, garlic, allspice, and sugar. Give it a good whisk so that the sugar is well and truly dissolved.

Personally, I like putting in an old jar and I shake it so its well mixed. I then put it in the fridge until I am ready to dress the salad.

Just mix all the ingredients together and also include the double roasted chickpeas! 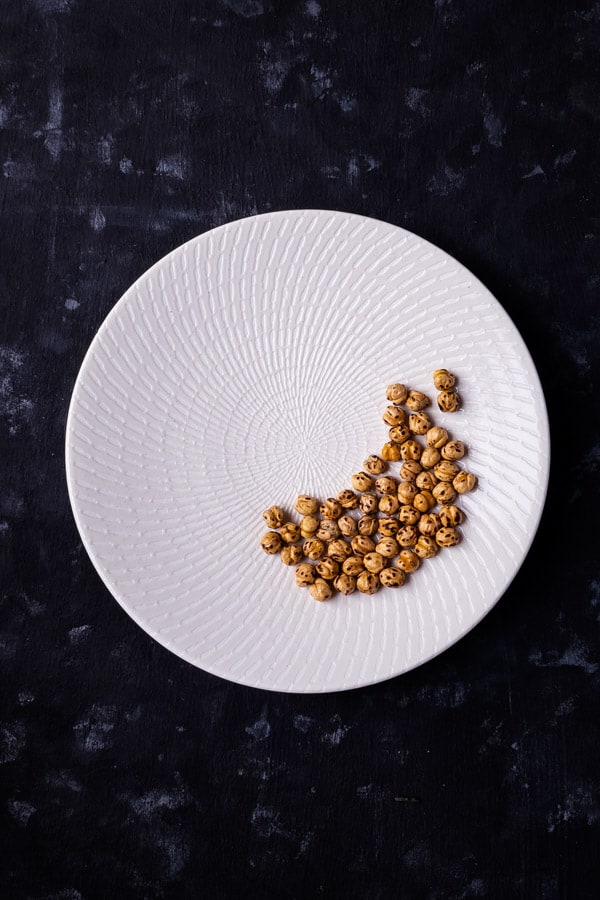 This salad can be prepared ahead of time and does not need to be assembled at the last minute. This is another key reason for making this salad as I may need time to get the other dishes for the dinner party done closer to the serving time.

A great “here’s something I prepared earlier” salad!

The colours are a bit subdued in this salad so bring out that platter you have always wanted to use! This is the perfect salad to go with any colour or design.

We love rice salads during the summer and they make for a great accompaniment to a main dish that is quite heavy in flavour. This wild rice salad recipe is easy to make and simply delicious as it continues to be one of my go to salads. Hope you’ll enjoy it too! 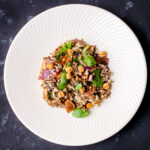 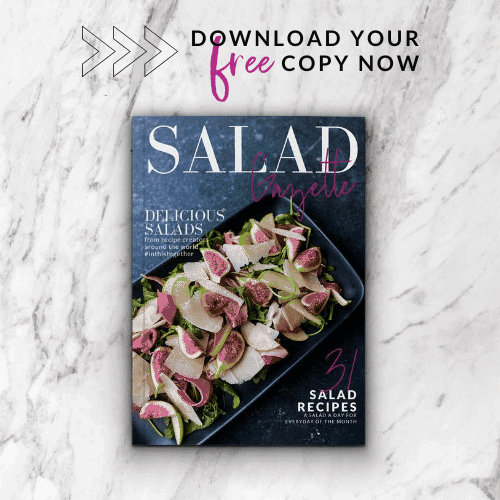