written by The Devil Wears Salad January 27, 2020
Jump to Recipe

Dive into A Traditional Style Salad That Heralds from The Intertwining of Chinese And British Malay Cultures of Centuries Past. This Zucchini and Cucumber Salad Celebrates the Fusion Between The 2 Cuisines, Replicated Nowhere Else in The World. 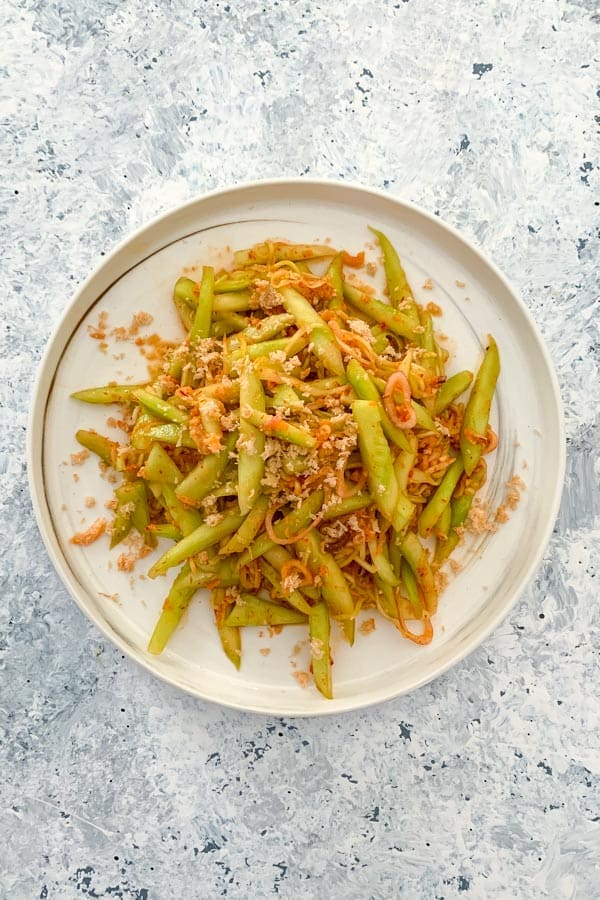 What is Peranakan Culture?

This salad stems from my Malaysian heritage. I thought I’d provide you a little insight to Peranakan culture so that you can understand how the base of this salad has evolved into a quintessential Peranakan dish.

Sometime between the 15th and 17th century, the Chinese migrated to the Malay archipelago which was made up of British Malaya (which is now Singapore and Malaysia) and Dutch East Indies (now Indonesia). To make it less complicated, I’ll stick to the Peranakan people of Malaysia.

Many of these Chinese migrants intermarried with Malay locals and from there, the rise of a new cultural era was born and their descendants are called Peranakan. It signifies locally born or the offspring of intermarriage between a local and a foreigner.

Most of the Peranakan people in Malaysia retained their Chinese heritage but assimilated into local life by intertwining both cultures giving rise to many unique customs. The most significant Peranakan cultural attribute that still thrives today is its cuisine.

My paternal grandmother is the epitome of Nyonya. A woman who dressed traditionally in figure hugging silk embroidered kebayas and sarongs. A typical Peranakan trait is someone who also speaks in 3 different languages of English, Bahasa and 1 or 2 Chinese dialects in one single sentence. I remember listening to her talk and her intonations and pitch varied so much it sounded like she was singing half the time!

She was also the best cook I ever met. Cooking defined her matriarchal presence, especially when my father’s 3 siblings, their children and us all gathered for meals. There was never a simple dish. Everything was always cooked to perfection and with no compromise on technique. 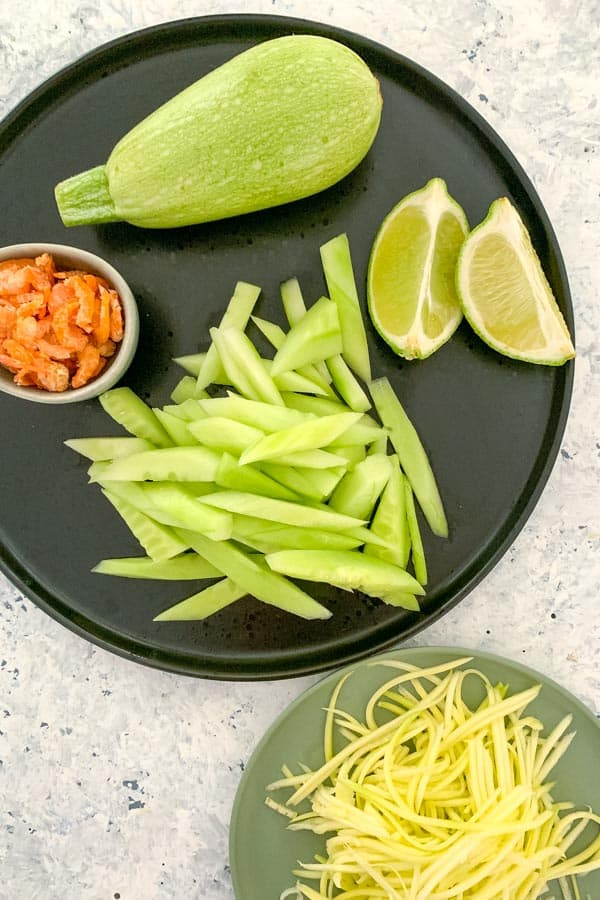 What is Nyonya Food?

In Malaysia, there is a slight variation between the Nyonya food in Penang, in the northern part of the western peninsula, compared to Malacca in the south, where my family is from.

It is said as Penang is closer to the Thai border, a lot of its recipes include a greater use of tamarind. Just a basic laksa noodle soup as we know it is different between the 2 states. And as you can imagine, there is always a rivalry of which is better.

It is essentially Chinese cooking but using local spices and flavours which inevitably created an entirely unique cuisine. The immigrants had to adapt to a new way of life and learn to make do with what was available to them. This hybrid of flavours is nothing like you would find anywhere else in the world.

This salad that I have made is a take on a traditional kerabu. Kerabu is a very well-known Peranakan salad but over the years, there have been so many variations, there is no longer a steadfast recipe. Unlike a classic Nicoise, Greek or Caesar salad, the kerabu has morphed into many different forms.

It does however remain as a side dish for Nyonya cuisine and it was initially made because they wanted to make use of leftover vegetables.

The kerabu always starts with vegetables and typically they have cucumber, bean sprouts, four-angled bean and sometimes a fruit element is added such as mango, pineapple and jackfruit. Occasionally prawns and dried shrimp are added too. The base of the kerabu however is always tangy and spicy. The tartness comes from the lime whilst the spiciness comes from the sambal.

What is sambal you may ask? Sambal is a chilli paste that is usually made with chilli, shrimp paste, garlic, ginger and shallots.

I used to love eating kerabu as it acted somewhat like a palette cleanser. Nyonya food is very rich with so many flavours going around that you kind of need to reset between mouthfuls just so you can enjoy the individual tastes. 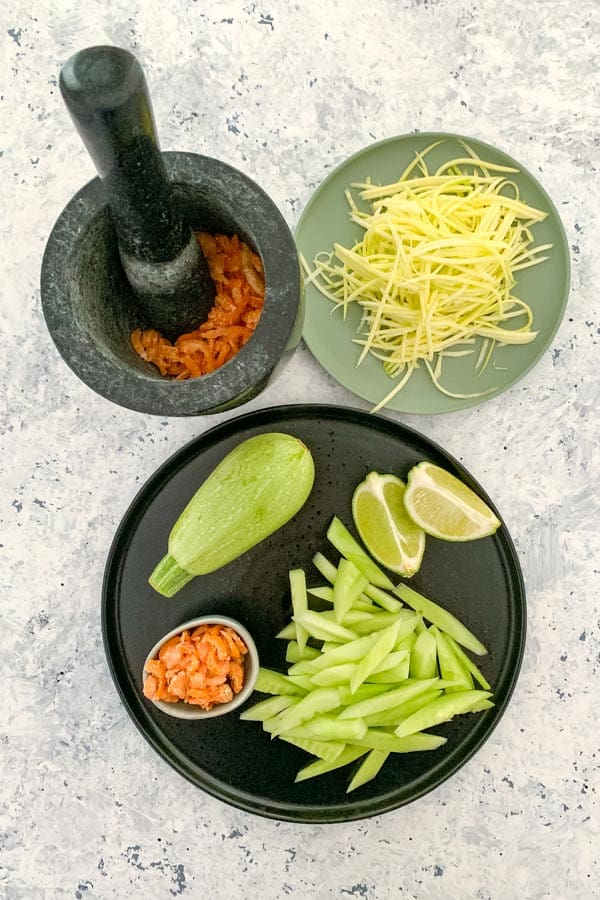 Why I Love Zucchini and Cucumber Salad with Dried Shrimp

The flavours are strong which stems from the shrimp paste in the sambal chilli as well as the dried shrimp itself. The lime helps to balance out the tastes and give it the tartness it needs. Overall, it is probably an unusual salad for most of you but it’s easy to put together and a great side dish for an Asian inspired meal.

How to Make Zucchini and Cucumber Salad with Dried Shrimp

How to Prepare the Zucchini

Peel the zucchini and shred it using a shredding peeler or mandolin. Ideally you want it to be like zucchini noodles. Don’t shred the core or seeds of the zucchini as we don’t want to use that part of the vegetable for this salad. The seed part waters way too much and would turn the salad into a soggy mess.

In a medium sized bowl, add the shredded zucchini and add ½ tsp of salt. Mix it thoroughly. Then place the salted zucchini into a colander and let it sit above the bowl for 20 minutes. You will see that the salt will draw out the water from the zucchini and it will start to drip.

After 20 minutes, we need to squeeze the water out of the zucchini. Place small batches into a paper towel and very gently, apply pressure and squeeze all the water out. You will be amazed how much water content a zucchini has! Then let it sit in more paper towels until you’re ready to assemble the salad.

Zucchini is such a versatile ingredient which is well reflected in these salads: Fennel and Courgette Salad with Toasted Pine Nuts and Five Spice Tofu Salad with Vietnamese Ham. 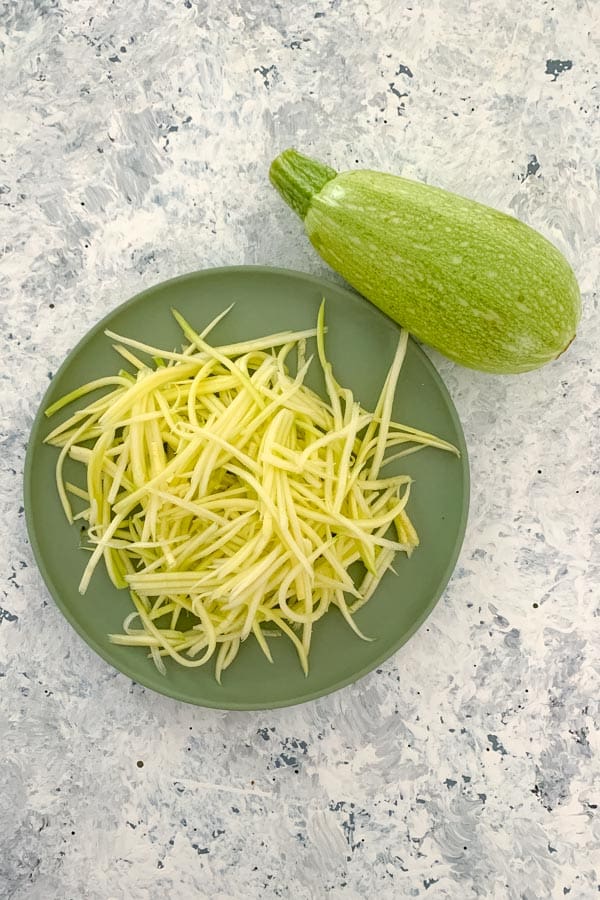 How to Prepare the Cucumber

Peel the cucumber. As the continental cucumbers are long, cut them in half. Stand the half on the cut base, cut the cucumber down lengthwise on all 4 sides, avoiding the seeds. Then cut them diagonally about 1-1.5cm apart.

Then as you did with the zucchini, place the cucumber in a medium sized bowl and mix it with ½ tsp of salt and coat thoroughly. Then place the salted cucumber into a colander and let it sit above the bowl for 20 minutes. You will see that the salt will draw out the water from the cucumber and it will start to drip.

After 20 minutes, place the cucumber in paper towels and gently squeeze it so that you can extract as much water as you can. Unlike the zucchini, it won’t be as much. Then let it sit in more paper towels until you’re ready to assemble the salad.

How to Prepare the Dried Shrimp

You can buy dried shrimp from any Asian grocery store. You’ll find that there are so many different varieties. Just select the smallest packet you can find. 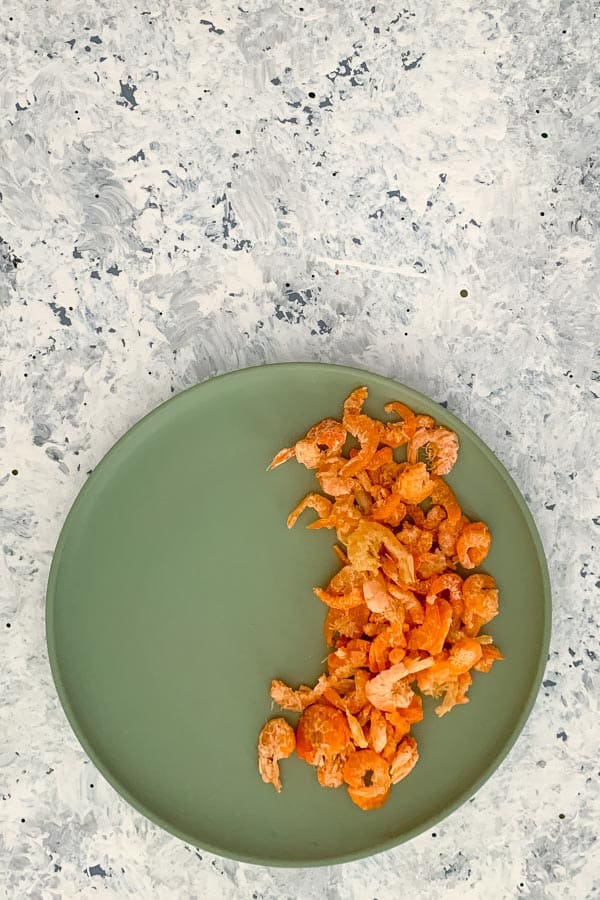 How to Prepare the Shallot

Remove the skin from the shallot. Then slice them as thinly as you can with a small knife.

How to Make the Dressing

In a small bowl or jug, mix the sambal, juice of 2 limes and caster sugar together. Mix until the sugar has all dissolved.

With the sambal, if you have freshly made sambal at home, great. I certainly don’t (unless mum is visiting!) so I rely on store bought sambal in a jar. Again, they can be found in any Asian grocery store and it will literally say sambal on it.

Get the normal sambal if it’s available. The preference is not to get the sambal with anchovies or the sambal with prawns. But if you can’t find regular sambal, either of those will also work well.

For this salad, you need a bowl or a shallow platter. This salad will water (unless your guests wolf it down in minutes!) so you need something that will catch all the juices.

In one of the medium sized mixing bowls, add all the ingredients together and mix until well combined. Then simply place the salad in a heap and serve.

Don’t look at this salad and think that it’s too hard because it has ingredients you may not be familiar with. But really, there may only be 1 or 2 ingredients within the recipe that may be a bit foreign to you. Bet you’ve eaten sambal and didn’t even know it! The dried shrimp and sambal are basic ingredients in Asian grocery stores so they are truly easy to find.

If you have an Asian palate and love the pungent flavours of seafood, this zucchini cucumber salad is for you. Go ahead and try something different. I would love for you to try a recipe so close to my heart. 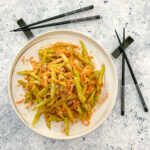 Such an interesting unique salad and I love the addition of dried shrimp in it!

Thanks Kankana! Yes its a little bit different to the conventional leafy salads we’re used to. Challenging our taste buds!

Wow, such a unique dish (to me) and I love the history lesson! I also enjoyed your step. by step instruction, it makes me want to make it, even though I’ve never tried anything like it before.

I love the family history you’ve shared about this dish and the background on Nyonya food. I spent some time in Malacca and was fascinated by the cuisine. I also love that this dish features zucchini – an ingredient that’s easy to get here in Canada.

This looks wonderful! I love zucchini and cucumbers, and these flavors looks really unique! I also really appreciate the historical context – so interesting!

I love anything zucchini and my son loves anything shrimp so this is a win-win in our house!

Yum! I never tried this recipe created from from the Chinese and British Malay cultures. This Zucchini and Cucumber Salad with Dried Shrimp looks really scrumptious and it’s making me crave right now.

What a great lesson in history, never heart of Peranakan culture before. Loved this background story. And then the following recipe sounds also great. Delicious for lunch!