A simple, light and refreshing Watercress Salad that you can throw together in minutes, provides a welcoming contrast to heavier meals. We adore the crunchy apple and pear with the peppery kick of the watercress, together with delightful creamy mustard dressing.

Why You’ll Love Our Watercress Salad With Apple And Pear

When serving grilled meats, I generally need a side salad that is light and refreshing to match. It helps to cut through the oils and richness of the protein.

This Apple, Pear and Watercress salad recipe is the perfect choice.

I get that watercress is not the most popular leafy salad green and can often be misunderstood.

Watercress does have a peppery bite, but there are so many different ingredients we can pair with it to help mellow the flavour.

In this easy cress salad recipe, I added apple and pear for contrasting sweet and tart flavours. Together with a tangy seeded mustard dressing, the combination is refreshing and deliciously delicate.

With literally no cooking involved and only taking 15 minutes or less to assemble, I love tossing this quick and easy watercress salad recipe together while the meats are grilling on the barbecue.

No fuss, healthy and super tasty side salad for your next barbecue or roast dinner.

Sometimes known as a weed rather than a vegetable, watercress is a part of the cruciferous family, the same as kale, Brussels sprouts and cabbage.

Watercress has small, rounded leaves shooting from long thin stems and is grown in waterbeds. The best time to find watercress in season is during the winter months.

What Are The Health Benefits Of Watercress?

Watercress is packed with antioxidants, nutrients and with 95% water content and low in calories, this green leafy vegetable delivers many health benefits. According to this CDC report, watercress ranks number 1 for nutrient density scores.

Once probably only known as a garnish, watercress is definitely proving itself today as a superfood. Just one cup of watercress contains more than 100% of the daily recommended dose of vitamin K.

My first taste of watercress would describe it as peppery. I would say similar to baby arugula leaves but not as strong as mustard leaves.

More mature watercress would be more bitter. Therefore best to use young watercress leaves for salads and more mature bunches for cooked watercress recipes like soup.

Can You Eat Watercress Raw?

You can definitely eat raw watercress.

Watercress is a versatile vegetable. Both the stems and leaves are edible and can be used in different watercress recipes.

I love using raw watercress in salads because of the peppery bite. Watercress is a great match with avocado in salads. Plus, it adds a refreshing touch to roasted radishes.

Flavour/Texture: Watercress gives this easy green salad a peppery bite but balanced well with apple and pear and a creamy honey mustard dressing. The same dressing works well in our Pear Arugula Salad as well.

I also adore the different textures in the salad, with crisp fruit and crunchy almonds mixing with leafy watercress greens.

Ease: No real cooking is involved, just a few chopping motions and toasting some almonds. Together with very simple homemade creamy mustard salad dressing, this watercress apple salad is one of the easy recipes on our website.

Time: 15 minutes is all you need to cut up all the ingredients and assemble together.

These are the ingredients you need for Watercress Salad with Apple and Pear:

Make sure you look for crisp and dark green leaves in the bunch. Any wilted stems or yellow leaves are signs that the watercress is no longer fresh.

Green apple: I love the tartness of Granny Smith apples in this watercress salad recipe. This helps offset the peppery flavours of the watercress and the sweetness of the pear.

Pear: Use a firm pear for the salad, as a ripe pear will be a bit too soft when you toss the salad together. Plus, the crisp sweetness adds to the overall flavour.

Almonds: For added crunch and nutty flavours, almond is a great pairing with apples, pears and watercress.

Seeded mustard: Also known as wholegrain mustard, seeded mustard is partially blended with some of the mustard seeds still visible. It has a tangy flavour which is great to balance the salad ingredients in this recipe.

Mayonnaise: Use good quality mayonnaise for the salad dressing.

Substitute for watercress: If you can’t find watercress, this salad combination will work very well with arugula (rocket leaves) or a mix of spinach leaves.

Egg free option: Omit the mayonnaise in the watercress salad dressing for an egg-free meal.

Vegan substitutes: Switch the honey for maple syrup or rice malt syrup and omit mayonnaise for a vegan salad recipe. You can also use our sweet mustard vinaigrette as a vegan dressing.

Mix of apple and pears: If you wish, you can just use all apples or pears with the watercress. Whatever you have in the pantry will work.

Seeded mustard replacement: If you don’t have seeded or wholegrain mustard, replace with Dijon mustard.

Step by step instructions for how to make Watercress Salad with Apple and Pear:

How to Prepare the Salad

You can use prewashed watercress leaves in bags, or if you have bought a bunch, trim any hard stalks and wash before using.

I normally dunk my whole bunch into water to make it easier to remove any limp sprigs or trim the hard stems.

Drain and shake off any excess water.

When ready to assemble, remove from water and pat dry with paper towels.

On a dry pan over medium heat, toast whole almonds for a couple of minutes. Then remove from heat and roughly chop.

How to Make Creamy Mustard Dressing

Shake until the dressing is well combined.

It can be left in the fridge until the salad is ready to serve.

How to Make This Salad Perfectly (Expert Tips)

If you do use bunches of watercress, make sure you cut away the tougher stems near the roots.

Don’t dress until ready to serve: Watercress will wilt quickly when dressed, so only add salad dressing to the salad when ready to serve.

Great Mains for This Salad

What to serve with Watercress Salad? Try these delicious main dish recipes:

This watercress salad is so refreshing, and it’s a great salad to have with heavier dishes or strong flavoured recipes. It would make a great side for this parmesan crusted chicken or air fryer fried fish, providing a well balanced meal.

If you’re after a juicy and tender burger, try this avocado burger. The crunchy apples and pears are an ideal partner.

Can I make this salad ahead of time?

You can prep the salad ahead of time but only dress when ready to serve. This watercress salad is best consumed fresh on the day.

How to store watercress?

Similar to herbs, you can store watercress in the fridge wrapped in a paper towel or leave in a jar of water and cover with a plastic bag. It should store well in the fridge for up to 3-4 days.

What to do with watercress?

Watercress is not only great in salads but in many cooked watercress recipes. Watercress is milder in taste when cooked.

Watercress is very popular in Asian soups. Normally cooked with pork bones, carrots and dried honey dates. The flavoursome soup is delicious but the watercress loses its texture and is definitely milder in taste.

Other ways to include this superfood, you can also do a quick watercress stir fry (like spinach or kale) by adding garlic and chilli. Or add it to a chicken mayo sandwich replacing salad leaves. For breakfast or a light lunch, you can cook it in an omelette instead of spinach leaves.

You can also add watercress in smoothies and sauces.

Place this Watercress salad with apple and pear straight on the table with grilled meats and literally watch it disappear. No complaints for bitterness, just loads of crisp fresh leafy green flavours that is perfect as a side salad. 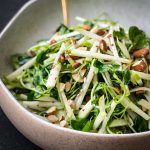 Watercress Salad with Apple and Pear